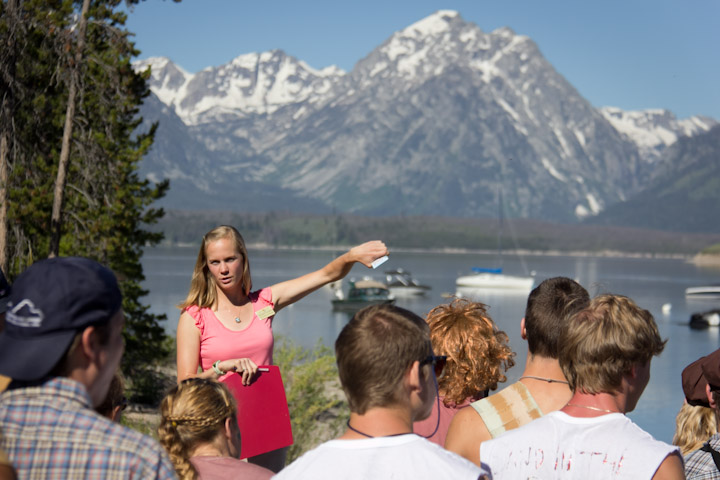 I will be ever grateful for the opportunities that seasonal work has offered me. I discovered CoolWorks.com and started my adventures in the seasonal world by working at restaurants in Glacier National Park and Denali National Park during my summers in college. After I graduated and started work in the real world, I realized that reality was not that great. I wanted to work and still have fun! So I decided to go back to the wonderful world of seasonal jobs and got a position working in Grand Teton National Park. I ended up accepting a position in the restaurant at Signal Mountain Lodge. I fell for the Tetons, and managed the front of house restaurant operation for three consecutive summers. During my first summer, I met a special fella that also worked at Signal. He became my beau, and we traveled between the Teton in the summers to winters in our home states of Minnesota and Florida. After three summers in wonderland, I decided that it was time to settle down and join the “normal” work force. I returned to the real world, and soon realized (yet again) that it’s not all it’s cracked up to be, and still not where I wanted to be.

Then as a turn of fate, I received a phone call from my previous seasonal employer, Signal Mountain Lodge, to see if I would be interested in a year round Human Resources Manager position. Was I?!? I didn’t really need to think about it – I knew where my heart and passion lay. I loved the opportunities that the seasonal world offered me, and if I could share that passion with others, helping them to spend a summer in a life changing place….then I was in! Back to the Tetons, and I was once again out living the dream in a National Park – this time all year round.

By taking on this entirely new role as the HR Manager, I soon found my place in life. I enjoyed making meaningful connections with my employees, and treasured the fact that the job allowed me to make a lasting impact on their lives. I spent three seasons putting my all into my seasonal HR Manager role, until I knew that it was my time to pass the torch. In September of my last season in the Tetons, I married that fella that I met during my very first summer working there, six years earlier. We became husband and wife in the Chapel of the Sacred Heart, on the shores of Jackson Lake and in the heart of the Tetons, where our story first started.

When I started looking for work outside of the seasonal realm, I felt confident that I wanted to stay within the HR industry. I soon got a job as a recruiter for a healthcare company and have been in this role for over a year and a half. My husband and I bought a home here in Minnesota. We’ve spent the last year and a half putting down out roots, and starting the next chapter of our story. Reflecting back on the path that lead me to this happy place in life, I know 100% that I would not be where I am today without CoolWorks and my seasonal experiences. I was able to take all that I’d learned in my seasonal adventures as well as the HR skills and knowledge from my time at Signal, and bring it back with me into the “real world.” My seasonal journey gifted me with the industry and career that I was meant for, as well as the person that makes my heart full!