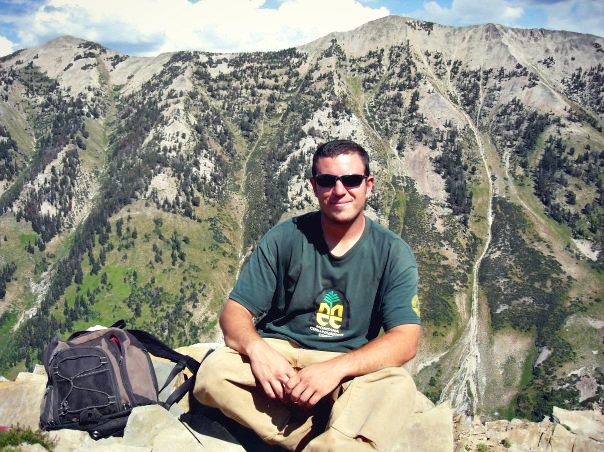 I often think back to that summer day in 2008.  I was on a walk around the neighborhood with my mom, talking about life, the future, and where I see myself in 5 years.  I was in my third year working for an insurance company, sitting in a cubicle approximately 8 hours a day, staring at a computer screen.  My waistline was getting larger by the month.  I was making decent money, and in the process of deciding whether or not to buy one of the town homes my mom had recently shown me.  I was living the “American Dream”… right?

During our walk, I mentioned to her about this awesome website I had found the year before while searching for other possible job opportunities.  The website was called CoolWorks.com, and their slogan, “Jobs in Great Places,” struck me.  What is this nonsense about actually liking a job, and living in a beautiful place?  I explored the website more and became active in the CoolWorks community.  I made a bunch of friends, and we all spoke of our dreams to go out and explore, to do something different, to make changes.

After searching the website for what seemed like months, I decided that I was most interested in the Conservation Corps Jobs.  I had worked at hotels previous to my insurance gig, and knew that I would have no problem getting a “front desk” position at one of the many hotels in one of many absolutely stunning locations represented on CoolWorks.  I wanted to try something new.  I wanted to get out of these buildings I had been in since becoming an “adult”.  I wanted to actually SEE these beautiful places I would be working in.  And the jobs that were posted under Conservation Corps allowed me that opportunity.

But where?  Do I stay on the East Coast, where I was living?  Do I head to the southwest?  Should I try the Great Plains or the Northwestern part of the United States?  Ahhh!  So many decisions and so many places.  I had a friend who recently had moved to Montana and talked about how beautiful it was.  And CoolWorks advertised conservation positions with the Montana Conservation Corps.  Should I apply in Big Sky country?

Getting back to that walk and conversation with my mom, on that warm summer day in 2008, I told her about the positions that were available with the Montana Conservation Corps.  She seemed as interested in it as I was!  I explained to her what I would be doing, where I would be living, and all the details I had in front of me.  And then I asked her one of the most important questions I’ve ever asked anyone in my life up to that point:  “Should I continue to look for a house, but be stuck working at this insurance company where I’m not happy.  Or do I save up as much money as I can, quit this job, and travel out to Montana to pursue something that could change the course of my life?”.  My mom, NOT the gambler, stopped walking.  I stopped and looked at her, and the words that came out of her mouth were music to my ears.  “What do you have to lose?  You’re still young! You don’t have a family, you don’t have anything tying you down.  Go out and experience life!”  And with that, we headed for home. I printed out the Montana Conservation Corps application and submitted it.

Fast forward to early 2009.  I had my phone interview with the Montana Conservation Corps (MCC), got accepted, and was ready to start a new adventure.  I took three weeks to drive out to Montana, visiting friends and family along the way.  I arrived about a week prior to starting work, found a place to live, and prepared myself for the adventure that awaited me.  I knew it would be an amazing summer, but little did I know how much it would change me.

After a few days of training with MCC, I was part of a crew.  Our crew consisted of 7 people; 2 crew leaders and 5 crew members.  We were a diverse group, all different ages, all different backgrounds.  Early on, we were told that many of our jobs, known as hitches, would be just south of Grand Teton National Park, in the Bridger-Teton National Forest.  For the first month and a half, we spent many nights hours from the nearest town, under a star-kissed sky, doing trail work in some of the most beautiful places on Earth.  Our primary focus was trail work, and we would hike approximately 5-15 miles per day, fixing trails and making sure that they were going to be around for years for the public to enjoy.  This was service to our country, but in a different way.  The feelings at the end of the day were indescribable.  Sometimes your entire body was sore and other times you were just physically exhausted.  But the reward was given to us when we would finish a trail and walk the entire way back to camp soaking up the fruits of our labor.  We remade these trails to maintain themselves.  It was hard work, and something I’ve never done before in life.  But I was making a difference, and that was the reward in itself.

Along with trail work, we also worked on a bunch of other projects which included spraying for invasive weed species, helping to restore a native trout stream to its natural habitat, and weatherization projects throughout rural Montana.  Each one of these projects taught me something new, not only about conservation, but about myself.  You learn about working with a group of people, living in very close quarters with them for over a week at a time.  You learn to allow yourself to rely on others, while gaining the strength yourself to be relied upon.  You learn about survival, and how to keep those pants that you’ll have to put on in the morning from being freezing cold when you are sleeping in a tent in 30-degree weather.  You learn life skills.  You learn about yourself, your strengths and your weaknesses.  But most importantly, you learn that it’s up to you to succeed.  There were plenty of times that I wanted to give up.  It was too hard for me, I thought to myself.  I’m not capable of doing this.  But I pushed forward and took things one day at a time.  And one day, I woke up and my thought process had changed.  I can do this.  I will do this, and I will succeed.

I started out this blog by talking in depth about my decision to join a conservation corps, specifically the Montana Conservation Corps.  I want to let you, the reader, know how that it was not an easy decision to make, to stop everything you’re doing in life, to take a “job in a great place”.  But what is there to lose?  More importantly, what is there to gain?

Sure, I could have chosen one of the many other jobs listed on the CoolWorks website.  I could have worked at a hotel in Yellowstone National Park.  I could have been a waiter at the Grand Canyon.  And while that may work for many people, I felt a desire to get out and not only see things, but to do things.  To get things done in the name of Conservation.

I urge you to consider a conservation corps job.  It changed my life in so many good ways.  After my season with MCC was over, I drove back home to New Jersey and was able to obtain a full-time job with the New Jersey State Park Service.  I finally found my passion in life.  Sometimes you have to take the chance on something.  And you never know how many doors will open after that.

To this day, I am constantly reminded of my time with MCC.  I often look back on what I did out there.  I was a 27 year old guy from New Jersey, working in a cubicle and making decent money.  I was becoming overweight from staring at a computer screen all day, every day.  At the end of my time with MCC, I was a 28 year old guy, 40 pounds lighter, stronger, more confident, with a self-esteem like you wouldn’t imagine.  If I can do it, you can do it.  And I promise you that you won’t regret it.

Hi Jason, I love your story and experiences. I too have been discontent with the rat race and am looking for something more fulfilling, working outside with animals or preserving the environment. I’d like to connect and see where I should go and what moves I should make to jumpstart this new life path. Thank you! 🙂