I recently returned home after two weeks spent in the Last Frontier. In honor of Alaska Day, which was this past Thursday, October 18th. I thought it fitting to dedicate this weeks’ Compass to our 49th state!

Alaska seems to be a place that captures people’s hearts and stokes their passions. One of my favorite things about visiting Alaska is soaking in its unique history and appreciating its people’s pride in their home. It’s a state unlike any other, and there is a spirit of ingenuity there that is really quite spectacular. From the families who spend their Saturdays out harvesting berries along the trail to the many local creatives who source their materials from the mountains to make all sorts of wonders like craft spirits and cocktails and forest harvested herbal products, to an outsider, the culture of Alaska is creative and incredibly resourceful. It’s a state filled with fascinating people.

I recently caught wind of an Alaska legend and mining pioneer, Fannie Quigley. As soon as I heard,  “She perfected her recipe for potato beer, and used the temperature differentials in the mine shafts as her own calibrated refrigeration system,” I knew I had to learn more about such a human. In addition to her skills at mining and prospecting, she was a master gardener, a brewer, a skilled hunter and trapper, a gifted embroiderer, and if she was around today, she’d likely have her own episode of No Passport Required, or Parts Unknown, she was such a talented culinarian. 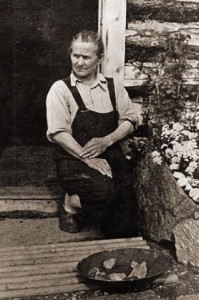 The stories goes that Fannie ran away from her Nebraska home at 16, learned English while traveling west with the expansion of the Union Pacific railroad, working as a cook in work camps. She made her way to Alaska in her twenties as a part of the Klondike Stampede and earned the nickname “Fannie the Hike” because she would pack her stove and kitchen gear great distances into the wilderness in order to set up shop making meals for unprepared miners. It seems Fannie’s heart was taken by Alaska, and she made her home and spent the rest of her life in the rugged wilderness of the Kantishna Hills. When she wasn’t working her claims, hunting big game or growing giant veggies, she was operating a roadhouse for explorers heading to or coming from an expedition on Mount Denali. The travelers would write accounts of their experiences at her homestead and she supposedly gained such notoriety that people would travel the great distance to her home just to be her guest and to meet her. In We are Alaskans by Mary Lee Davis, Fannie’s chapter is titled, “Little Witch of Denali”. You can still visit her cabin at the at the end of the 90-mile road that runs into Denali National Park.

“She was a dog musher, prospector, trapper, hunter, woodcutter, gardener, and one of the best sourdough cooks I have ever run across.  At a Christmas dinner once, Fannie served black bear roast, gravy, mashed potatoes, fresh cabbage, hot rolls, currant jelly, cranberry sauce, and fresh blueberry shortcake.  Only the flour and sugar had been freighted in. The rest was from the country.”– Grant Pearson former Superintendent of Denali National Park

– Excerpt from an article on Fannie on the National Park Service website.

I loved Fannie’s story because I’m a sucker for those tough-as-nails historical female figures, but I also loved it because her story reminded me of the stories I’m seeped in and absorbing every day – the stories of the CoolWorkers I hear from daily, the free spirits that cast off conventionality and go searching for their own Last Frontier – be it in the far north or elsewhere.

The cause for my recent visit to Alaska was to attend the Alaska Travel Industry Association’s annual convention. The best part of the trip (in addition to the warm weather and plentiful sunshine) was meeting so many passionate Alaskans and hearing their stories. Some of my favorites were the ones that started out: “CoolWorks first brought me to Alaska, and now it’s my home.”

The Fannies, the Annes, the YOU’s out there that continue to forge new trails and follow your hearts – Thank you for inspiring me to continue to create a life filled with adventure.

Interested in embarking on your own great Alaskan adventure? Keep an eye on the Alaska Jobs Page!