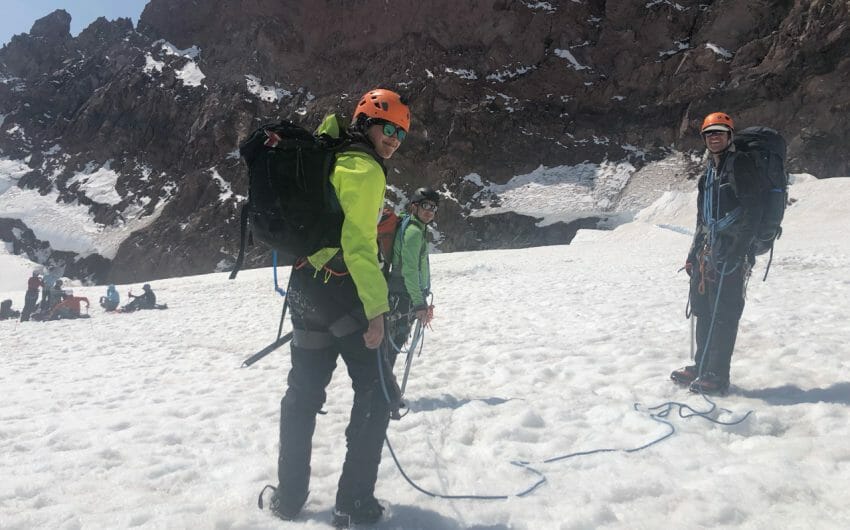 Welcome to another edition of the CoolWorks Journal! This week, we hear about Alaska and seasonal jobs from an Alaskan! Laura spent a good portion of her youth exploring the Last Frontier after relocating there from her birthplace in Vermont. She shares some of her favorite memories of summers in Alaska, and describes a recent encounter with Bill Berg, the founder of CoolWorks, on Mt. Rainier!

Alaska is widely considered by many to be the Last Frontier of America. The days of the Wild West and Western Expansion in the Lower 48 were long left in the rearview mirror, and while the Western U.S. still has large tracts of wilderness and modern-day cowboys, the West is far from what it once was.

Alaskans are a different breed. It’s a rugged state, and one can easily get lost in its vastness. Wander out your door and in most parts of the state, you can walk into the wilderness and truly be in the wild. Lost souls like Christopher McCandless and even FBI fugitives have sought their harbor from a society that they could no longer be part of in the northernmost state. Countless others have made the pilgrimage north. Whether running from or looking for something, Alaska’s wild bosom has welcomed them with its bounty, and sometimes with its harshness.

I was born in rural Vermont, a state that has regulations prohibiting construction above 3,000 feet, a liberal state nestled in New England, and while the state doesn’t have any actual coastline, it is geographically considered East Coast. With winding rivers, scenic covered bridges, maple syrup and candy, the Long Trail, and, of course, home to Ben and Jerry, it’s not coincidental that my heart, ostensibly, has always been wild. And when the state got too crowded, per my parents’ desires, I was uprooted to the “North to the Future” State, where I spent my adolescence in a much bigger outdoor playground.

I spent my college years studying away, but earned an Outdoor Leadership Certification on top of my degrees, spending a year mountaineering, kayaking the Inside Passage, traveling the Mendenhall Glacier, venturing deep into the Yukon Territory – all of these adventures culminating in a 40-mile round-trip expedition in the Gates of the Arctic National Park and Preserve.

As an Alaskan and avid outdoor enthusiast, I’ve long been familiar with CoolWorks. Tourism is the bread and butter of Alaskan business, and there’s no quicker ticket to the Last Frontier than a seasonal summer job when the cruise ships start running north and the Alaska Railroad system kicks back into high gear. Many of my friends found seasonal jobs river-raft guiding on the Nenana outside of Denali National Park, jobs working on glaciers and running dog sled tours, jobs guiding people by kayak through the fjords surrounded by glacial ice, amazing jobs that take you to wild spaces and, often, once in a lifetime experiences and adventures.

I myself had the opportunity to work in Healy, Alaska – the small Alaskan town right outside of Denali National Park (and no, I am not talking about what we call Glitter Gulch, which is situated 12 miles north but closer to the park entrance). Healy was put on the map by Alexander “Supertramp” McCandless because it’s the town closest to the infamous Bus.

Healy is where I scored a seasonal summer job through CoolWorks guiding ATV tours through the wilderness of Alaska for the summer of 2011. It was one of the most unforgettable summers of my life, making money while getting to play in the Alaska wilderness. Making lifelong friends all brought together by CoolWorks. I think back fondly to memories of camping on the Old Denali Highway, long replaced by the Parks Highway, to riding out to Wonder Lake, hiking Mt. Healy, canoeing on Otto Lake, and even playing around on the glacier at the base of Denali itself.

Those days are long past, but those experiences live with me. I am still an Alaskan at heart, but I traded snow and remote mountain ranges for the desert playground of Southern California, where I avidly rock climb and hike. I recently took a trip up to Mt. Rainier (my friend had landed permits for 4th of July weekend) and ran into a pretty rad group of folks camping at Ingraham Flats. Among them were two retired park rangers and an Alaskan. I saw a CoolWorks sticker on one of the water bottles. Turns out, I was chatting with Bill, the founder of CoolWorks. What a small world.

So, this is written for Bill. I wanted to say thank you. I hope you know that your website brings people adventure, creates memories and friendships, and affords people the opportunity to travel to places where they get paid to do the things that they love. CoolWorks really does bring people together. I hope you recognize how much joy you’ve brought to people all of these years and how many dreams you’ve helped come true. So, thank you Bill, from the bottom of this Alaskan’s thick-blooded heart, for fostering so many friendships and memories. I hope our paths will cross in the great outdoors again. Until then, on to the next adventure.