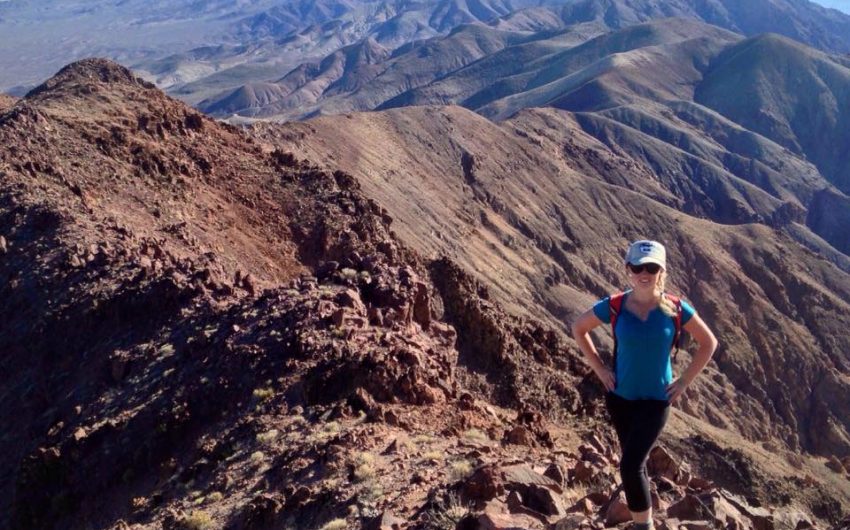 When strangers ask me how I came to work in Death Valley, I lie.

I’m not ashamed of the truth; I just know that it’s not what a family of bright-eyed tourists wants to hear over breakfast. Like a lot of parkies, my pilgrimage to the middle of nowhere wasn’t inspired by memories of a particularly pleasant family camping trip or a dog-eared copy of an Edward Abbey book. Here’s what really happened:

It was Christmas in Colorado when my on-and-off boyfriend of four years kicked me out of our shared apartment and broke up with me for good. I was jobless, friendless, heartbroken and about to be homeless in a city I barely knew. I was 22 with ten dollars in the bank. My car was parked on the icy street outside and it was starting to look like the only home I could afford. It was one of those rare crisis situations that afforded no time for crumpling into a corner. Some weird, previously unknown survival instinct took over instead. I walked to the library, logged onto CoolWorks.com, and started applying for jobs. Almost immediately, I had three offers: Winter Park, Park City and Death Valley. I wanted to get as far away as I could from Colorado, so I chose the latter. A week later I moved to California.

If you’ve never been to Death Valley National Park, the first thing you need to know is that it’s not for everyone. Hundreds of employees and tourists alike get out of their cars at the park entrance, shade their eyes from the punishing sun, look off into the barren horizon and immediately wonder when the next flight home is. But for the lucky ones, it’s the best place in the world. I was—and still am—one of the lucky ones. I’m not a very emotionally expressive person, but the first time I saw the undulating badlands, the pristine sand dunes and the snow-capped 11,043-foot Telescope Peak towering above the sparkling salt on the below-sea-level valley floor, I cried. I expected nothing from Death Valley and ended up meeting the two loves of my life: my fiancé and more importantly, the park itself. And yes, my fiancé is well aware of this order.

Death Valley’s big claim to fame is, of course, the whole hottest place in the world thing. On July 10th , 1913, the temperature at Furnace Creek topped out at a record-breaking 134 degrees. In 1996, there were 105 days over 110 degrees and 40 days over 120 degrees. It’s true that summers are hot enough to melt your windshield wipers, the rubber on your hiking boots and to be totally honest, your spirit. But here’s the thing: Temperatures from October through May are actually pretty perfect. On my first week in Death Valley in January, I was drinking margaritas by the hotel’s spring-fed pool, hiking Golden Canyon in shorts and wearing sun dresses everywhere. If you’re a parkie who loves mountain parks like Glacier and Grand Teton and you want to keep summer going all year round, you can bask in the glory of the warm, California sunshine during a winter season in Death Valley. Because of the park’s insanely diverse spectrum of elevations, it’s possible to hike year round. In the cooler temperatures of fall, winter and early spring, you can explore Death Valley’s canyons where you’ll find high narrows (Titus Canyon), ghost towns (Panamint City) and even waterfalls (Darwin Falls). Once late spring hits and temperatures heat up, you can head to the mountains and climb Telescope Peak, Wildrose Peak, Mt. Perry, Towne Peak and many, many more. You can even drive two hours west and hike to the summit of Mt. Whitney, the highest mountain in the contiguous United States, or bag one of the other less famous (but equally awesome) peaks in the Eastern Sierra. If you’re a photographer, you can spend months just trying to capture the perfect sunrise at Zabriskie Point. If you’re into art you can explore the Goldwell Open Air Art Museum at Rhyolite ghost town. If you like golfing or, like me, have always wanted a reason to buy more argyle, you can learn to golf amongst the coyotes at the lowest golf course in the world at Furnace Creek Ranch. And hey, if you’re missing civilization, you can drive two hours east to a little town called Las Vegas where I’m fairly confident you’ll find something to do.

When I moved to Death Valley, all I wanted was a place to live for a few months while I got back on my feet. I ended up working there seasonally for almost five years. During that time, I fell in love with more than just the desert. I fell in love with parkies. Sitting outside on the steps of my dorm in Furnace Creek, drinking beer and talking until dawn, I met some of the most amazing people in the world. These people came from all over the country, all over the world. They were rich, they were poor. They were drifters, hitchhikers, vagabonds looking for home, time travelers who wanted to live in a world without cell phones and internet. A world where it was possible to sleep under the stars, to point at a spot in the distance and actually go there. Together, we were the orphans of the world. A group of kids who never wanted to grow up. We lived together, worked together, hiked together, danced together, fought and made up.

Whether you love it or hate it, if you move to Death Valley—or any national park for that matter—the wilderness and the wonderful, weird people living their lives inside of it will change you forever. I don’t live and work in Death Valley anymore, but I’m close enough that I can visit on the weekends. It’s kind of like seeing an ex-boyfriend. I’m a little sad that it still exists without me, but I’ll never forget our time together.

There’s a reason why the animals who live in Death Valley are so tough. They don’t really have any predators but they don’t really have any allies either. When I ran away from Colorado and moved to California, I thought the same thing of myself. The parks I lived in and the parkies I met showed me that I was wrong about that. Next year, I’ll be getting married in Death Valley. When I retire, I’ll probably buy a trailer and move back. In all likelihood, I’ll die there. If you think I’m being dramatic, it’s because you haven’t found that place for yourself yet. Once you do, you’ll understand. I promise. Pack your stuff. Quit your job. Buy a map and go.

The trick is to never stop looking.