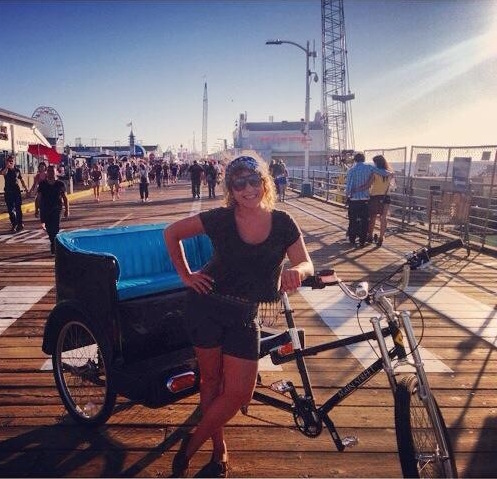 I’ve been sick with it for as long as I can remember. I was stricken with the fever as a tiny child and have been plagued by its symptoms ever since, which range from the mild and manageable to the cruel and unusual: I can name every single flavor of tree shaped car air fresheners. I have tortuously specific rituals for crossing state lines. My dashboard is a sacred altar, painted and plastered with rocks, feathers, sage bunches, and photostrips of loved ones. I have time tested mixed tapes and albums for each kind of weather, scenery, time of day, or mood imaginable. (Neil Young, always, in Wyoming, U2’s Joshua Tree in the deserts of the southwest, the White Album whenever I miss my parents, and anything fast and loud when I‘m sleepy.) I have perfected the art of the roadside pee, and I never let my gas tank get less than a quarter full (especially in West Texas). I put on a Fleetwood Mac album and pray to Stevie Nicks for guidance when I’m unsure of my gypsy tendencies, and I am hypnotized by the holy swivel of a dashboard hula girl’s hips.

My name is Brooke Trout Paulus, and I suffer from severe and chronic wanderlust.

I was a woman in motion before I was born. The first daughter of a retired rock and roll roadie from Baltimore and a military brat expat raised in Hawaii, I was doomed from the start. My parents met in 1980, started dating as a result of a bet my dad won, and proceeded to, and I kid you not, run away with a traveling carnival. They fell in love driving from city to city, spent their off-seasons camping and meandering cross country, and after two years, decided to marry and start a family on the road. They should have known that the highways in which they had come to know themselves and one another so intricately on would infuse themselves in my blood before I ever stood a chance. I was a child of the road before I could even speak. I was rocked to sleep by rhythms of rush hour traffic and was comforted by the familiar aromas of hot asphalt and exhaust. Whereas most children don’t fare well on long drives, I was content to stare out the window, looking for out-of-state license plates, and watching billboards, power lines and palm trees whiz past my tiny eye balls. I loved to imagine where people were headed as they passed – what they were listening to or what they were thinking about, what they were rushing to, or what they were running from. As I grew, so did my wild imagination. And with it came my incurable penchant for adventure.

I’ll never forget my first time. I was a senior in high school and I snuck out of my family home in San Diego, rounded up some friends, and drove eight hours north to see the Mars Volta on New Year’s Eve at the Bill Graham Civic Auditorium in San Francisco. I begged forgiveness rather than permission and told my parents I had gone to honor the rock and roll and open highway in my blood. I remember the punishment being light (hugs, headshaking, and eye rolls?), which was probably why these kinds of hijinks and impromptu drives became standard fare, and why it surprised no one when I took a gap year after high school to hit the open road to travel and volunteer with Americorps. Or when I took a second gap year to run a Hurricane Katrina relief camp on the Mississippi Gulf Coast.  What really shocked them was when I decided to move back home San Diego to go to school for a year. I had a heavy course load, worked two jobs, and would spend my free time camping in Joshua Tree, or exploring Pacific Coast Highway on the back of my boyfriend’s motorcycle. But the single serving adventures weren’t enough. I only survived two semesters before feeling that dull ache in my heart that signaled something was awry.

I was restless, antsy, and unfulfilled. I was hungry for adventure. And also for rolled tacos. So I had lunch with my friend Kelsey (whom I had grown up going to the beach, riding bikes, and raising hell with), and over an order of carne asada french fries she told me she was leaving at the end of the spring to take a job in the national parks. She had landed a killer gig while clicking around on a seasonal employment search engine called CoolWorks.com, which she described to me as a Craigslist for incredible jobs in amazing places. As she went on about how the website worked and which lodges she was considering, the wheels in my brain were turning like a getaway car. You see, I had been reading a lot of Kerouac and Thoreau and had also recently become smitten with Ken Burns’ love letter of a documentary, America’s Best Idea and had been researching and reading everything I could get my hands on regarding our national parks. My New Year’s resolution had been to try and visit at least three of the California parks before the end of the year. Little did I know, I was about to surpass that goal tenfold. Call it what you will – fate, serendipity, or the recklessness of my youth – but before the last drop of horchata was consumed, I was already gone. The second I got home, I went online and played my own version of CoolWorks adventure roulette. Did I want a job in the national parks? Or maybe specifically a gig on the water? Did I want something in hospitality and service industry? Or did I want to return to my non-profit roots? If I hit the international job filter, things got REALLY exciting. My head was spinning with dreams of Fiji, India, and Africa, and my heart was exploding at the prospects of being a horseback guide in the painted deserts of Arizona or working at a ranch in Alaska so remote it could only be reached by helicopter. I was in heaven.

CoolWorks was like an adult choose your own adventure book. And I was hooked. I got my affairs in order, packed my bags, and a little over a month later, was headed due north to meet Kelsey in Wyoming, in search of freedom in the wild wild West.

I fell in love at first sight with the Tetons. It was an all-consuming and passionate love affair. I hiked them and climbed them. I swam, fished, white water rafted, and kayaked in their surrounding creeks, lakes, and rivers. I painted them and read about them and wrote about them, and the more time I spent in them, the more I learned about myself, about people, about life and about love. And all amongst the backdrop of some of the most heart stopping scenery in the world. The mountains and the skills you acquire to navigate them make you feel so strong, while their impossible grandeur, majestic presence, and perilous beauty make you feel so small- a combination which yields an inescapable hotbed of self-discovery for a searching twenty-something. The mountains made me and molded me. They prepared me for the unconventional lifestyle of danger, romance, uncertainty, and unadulterated awesomeness that I would create for myself.

My solo ventures out west made me feel invincible. So much so that upon finishing my season, I immediately accepted a position doing relief work in Haiti and took my first journey alone into a third world country. I had the adventure of a lifetime and when I got back, I decided to follow my sub-tropical inclinations and move to New Orleans, which has been my basecamp for living the dream by living outside the box for the past four years. By day, I operate my own bed and breakfast, where I can share my ardor and zest for all things off the beaten path and utilize my travel honed hospitality with backpackers from all over the world. (I’m also putting those sheet folding skills acquired from my first housekeeping job in the Tetons to good use.) By night, I take tourists on rip roaring adventures through the French Quarter in my bicycle rickshaw. Both vocations put me in a wide array of wild encounters with interesting people from all over the globe, as well as allow me a flexible self-made schedule and the financial freedom to get up and go and travel as I see fit. I still do three to five disaster relief projects a year, and I even took a crew of ten pedicabbers with me on my most recent trip to do flood relief in Houston. I’ve found a way to combine all of my passions, and I am currently on radical summer sabbatical, pedicabbing music festivals cross country, hitting every national park I can along the way, and finishing the summer off with a short but sweet fifth stint in the Tetons before I return to New Orleans.

I am so lucky that the adventures I live on a daily basis fund my adventures cross country and abroad, which is my dream manifested and actualized in the biggest and most beautiful way possible. And I have CoolWorks to thank for it. They completely challenged my idea of a nine to five and showed me the way to make my love for the unconventional an actual means of making a living. The best part is that no day is ever the same. I never know what kind of delicious chaos the day will bring, what kind of strange and lovely situation I will find myself in, or what kind of human is going to stumble into my my life via my bed and breakfast or my pedicab, or where my seasonal summers will take me – but I am a fiend for the journey and I love not knowing what’s going to happen.

My name is Brooke Trout Paulus, and I am hopelessly, unabashedly, and unapologetically, addicted to adventure. Forever and ever, Amen.

I was stuck in a small town wanting to travel and meet new people. My most recent job was at Gunflint Lodge in Northern Minnesota. It’s the only place where I felt comfortable with myself and everyone around me. I highly recommend that other people who are like minded check it out. If you don’t mind being in a place where you’re in the middle of nowhere, then this is a good place to live and work. There’s no cable TV there, but lots to do outdoors. Minnesota is an amazing place.