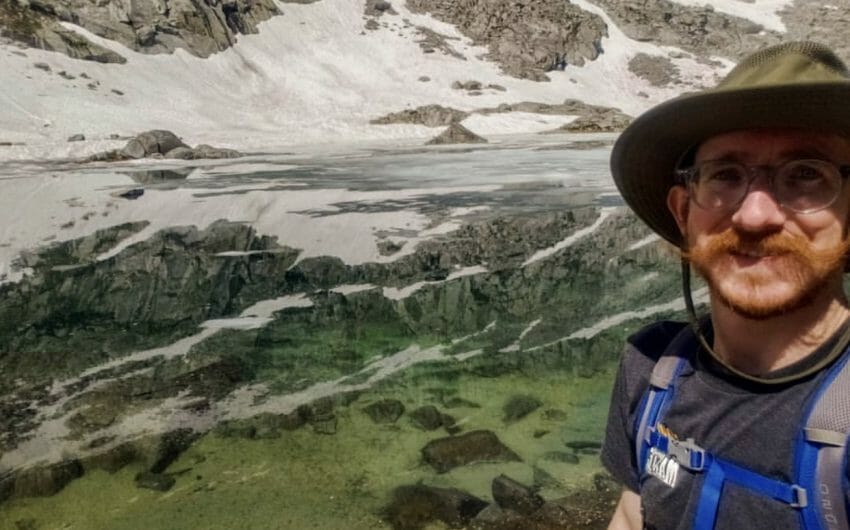 Many of the folks we come into contact with found their way to seasonal work as a result of wanting to make some major career and lifestyle changes. In this CoolWorks Journal, we hear from Joey, who jumped from being a homeowner with a comfortable but unfulfilling job, to living and working in several different National Parks, hiking hundreds of miles, and being on his way to bagging his first through-hike. Not all career changes are this dramatic, but they aren’t all as exciting either!

Before seasonal life, on paper, I was doing great in life. I had a decent paying job with tons of benefits and plenty of room to keep climbing the ladder. I bought a house, owned a few cars, lived in walking distance from my favorite hangout spots, was surrounded by family and friends who genuinely care for me – everything was perfect.  Yet I was longing for something different. Something out of the norm.

In 2014, I took a full month off of work to go venture in a small rural town in Ecuador. I never knew that the trip was going to impact my life so much. It was my first time outside of the country and the first time taking more than 1 week of vacation in 8 years. And it was AMAZING! I couldn’t have asked for a better experience. Years removed and looking back at this trip, the biggest thing I learned was how to redefine the term “success.” And coming to understand the saying “less is more.” I knew the way I was living my life was not the way I wanted it to be – the typical “work 50 years or so in hopes to retire and hope that I have good health to then have fun.” You know, the great American dream.

When I came back from Ecuador, all I wanted to do was figure out how I could change my life.  I began to scour the internet in search of alternative living, reading blog posts, listening to podcast after podcast of people living different from society, from debt-free living to minimalism. People living the tiny house life, RV life, and van life. People who worked seasonally to people who volunteered seasonally. I explored contract jobs in the Middle East to contract jobs on cruise ships. I spent countless nights just digging in and soaking all the knowledge these people had to give. It quickly became the main topic I talked about with my friends. The one thing I lacked was the courage to take the leap. It just felt like a dream I couldn’t reach. I would make excuse after excuse as to why I couldn’t take the plunge to change my life.

Advancing further into my career and plunging deeper into the rat race, I took on more and more hours. I never really disliked what I was doing. But what happened next was the breaking point. In January 2016, I was voluntold to work a minimum 10-week project an hour and a half away from home. I was working 14 – 16 hour days 5 – 6 days a week, sleeping maybe 3 hours a day. The icing on the cake was this project had to be completed overnight. I was also in the process of buying a house. Worst timing ever. Daytime meetings with my realtor and tons of phone calls with my loan officer – I was so tired I would often take naps in an IHOP parking lot along my route back home from work.  It was a nightmare. My social life tanked. The will to do pretty much anything else was gone. This is how life is supposed to be, right?

One of the loneliest times of my life was the day I closed on my house. I went to work that night at 7 PM, returned home at 11 am the next day and closed on my house at noon. No one was there to celebrate with me because I had cut myself off. I remembered going to the house and walking around to see if I felt any joy. The only thing I felt was accomplishment – I could put a checkmark next to buying a house. Just another thing to keep me planted in what seemed as the never-ending rat race. I felt no joy. I went to a bedroom, curled up on the floor, and cried myself to sleep. I felt lonely, I felt as though I failed my dream of changing my life. What was I thinking, buying a house?

After this ordeal, I dreaded going to work. I was tired of it, but now I was stuck, or so I thought. During all this, I never stopped searching for a different way to live. A website called CoolWorks.com became one of my go-to websites for dreaming. I still saw no escape from my rat race. Then life or Yahweh forced a door open for me, as if knowing I would never commit to leaving. I was laid off in January 2018 due to a company restructure. I had never been at that point so happy in my life. Yes, I’m a weird one. I cried with disappointment and failure when I bought my house and was full of joy when I got laid off! It was confirmation that I was not meant for the “American Dream”.

So now comes the fun part. What to do now? Come June 2018 I bought a van and decided van life was what I wanted to do. I didn’t want to do a full van build just in case I didn’t like it.  So I just put up some curtains and left home in July to see our beautiful country and what was out there for me. I told my family and friends in 3 months I’ll be home, unless I liked it – then I’m not coming home. Two months in, I was having blast. If it wasn’t a drive day, I would spend the day hiking in national and state parks or at local skateparks throughout the country. In two months, there were two things I learned: living in the van during summer was not fun, and I didn’t want to go home. So I made the first step in my major career change and landed my first seasonal job at Yellowstone National Park via CoolWorks. WOW! What a crazy experience.

It was the first time in 9 years when I didn’t have people working for me. I was the bottom of the totem pole in some people’s eyes. To the guests that I got to talk to from all walks of life, I could see the jealousy in their eyes as if I was living a utopian life. The most common question I was asked is, “Do you guys live here or do you have to commute in every day”? They are often shocked when I tell them “No, I walk every day to work”! It’s crazy to think that people spend thousands of dollars and travel from all over the world to come to see Old Faithful go off once. And I’ve seen it erupt up to 4 times in one day while getting paid to do it!

I left Yellowstone bound for my next seasonal job at Grand Canyon National Park. Boy was it grand! HAH. Before leaving my house, I was never a hiker. I lived and grew up in the coastal plains of NC. Everything is flat. By the time I got to  the Grand Canyon, I had already hiked over 300 miles of trails throughout the country, summited my first peak in Frisco, CO at 11800 feet. This elevation is crazy to me to understand still. I grew up at 80 feet above sea level and the tallest mountain east of the Mississippi is in NC at 6,683 feet.

One of the biggest personal draws for working in National Parks is the hiking. So I took full advantage of it. I met a thru-hiker, who we dubbed “Hiker Mike” who started working at Grand Canyon around the same time I did to build funds for his next hike. He had completed the Pacific Crest Trail northbound, and road walked Texas. I learned a lot from this guy and was very impressed with everywhere he had hiked. “Micro spikes? What’s that?” One of the craziest hikes I went on was with him when we hiked 20 miles or so down the Hermits Rest trail to the Colorado River and back before work. Got to take advantage while you can.

I left the Grand Canyon after 7 months feeling accomplished. I left the canyon with over 500 miles of trails hiked. Hiking had swiftly became my biggest priority outside of work. I want to see everything. But I needed to progress further. I had never gone backpacking before. The last few months at the Canyon, I started building my gear up. By the time I landed my next seasonal job, I had enough gear to finally make the plunge into backpacking. My next destination is Silver City Mountain Resort. It’s a privately owned resort located in Sequoia National Park. It’s going to be a big change for me. There are only 11 employees and less than 100k visitors to this side of the park per year, compared to Yellowstone and Grand Canyon, where they have over 5 million visitors a year each. And it’s off-grid living there! The place is a gem. But this is the location where I started my backpacking trips. It’s been a slow process, and I still have a lot of things to learn about gear, getting my pack at the right weight, how much water to carry, etc., but I’m hoping to learn enough to go on my very own thru hike.

I still work 40 hours a week. Money is still an important factor in my life. I still have debt and bills to pay. The difference is, money is just a byproduct of being able to live and work in some of the most beautiful places on earth. A new goal I have which I hope to reach soon is only working 6-9 months out of the year so I could spend the rest of the year doing whatever I like, whether that be going home or travelling to another country. One cool thing is my mangers made these career changes for the same reasons. Depending on business needs, most managers will grant you extra time off to explore, which I take full advantage of during slow times in the parks.

One fun aspect of seasonal life is not knowing where you will be next. What state? What park? Should I go home for a few months? What a crazy life I live compared to where I was headed.  This is one of the best ways to see and explore our country. Above all things, from the job to the hiking and exploring new places, is the everlasting friendships! I hope to be challenged and challenge others to step outside their box and do something different. Seasonal life is like going on an all-inclusive paid vacation that only ends when you want it to end.